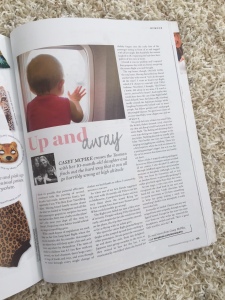 It’s possible that parental affection combined with the passing of several decades had made memories fuzzy, but apparently I was The Best Ever Travelling Baby. Having heard family stories such as “the time we landed in Singapore and all the other passengers gasped in surprise because they had no idea there was a baby on the plane” and “the time you slept all the way to Hawaii”, I hoped my own babies would inherit my magical travelling gene.

With a small degree of trepidation, we took Amy on her first long-haul flight when she was six months old. Six months: that magical age where they still sleep quite a bit and can’t move anywhere by themselves. The ratio of adults to children was 4:1 (we flew with my parents), we had a bassinet, three massive carry-on bags of books and toys, and even though we went through every single change of clothes thanks to reflux, I chalked the mission up as a success.

So when one of my best friends suggested I fly over by myself to see her in Melbourne with 10-month-old Tilly, I jumped at the chance and was very blasé about the actual flying bit. Pfft – it was a simple 4-5 hour trans-Tasman jaunt! What could possibly go wrong?

The flight over lulled me into a massive false sense of security, and in no way prepared me for what was to come on the way back. Despite waking Tilly up ridiculously early, and despite the fact she would not sleep on the plane, the trip there was pretty smooth as far as flying with an infant goes. She spent the entire flight pummelling my thighs as she jumped up and down smiling at other passengers, and was then passed up and down the aisle from one delighted Japanese tour-group member to the next as they waited in line for the loo. I was momentarily mortified when Tilly buried her chubby fingers into the curly hair of the passenger sitting in front of us and tugged with all her might before I even realised what was happening. The passenger quickly placated by laughing it off and explaining she had three little hair-pullers of her own at home.

I did learn an important lesson in appropriate-clothing-when-flying-with-a-baby, however. I’d stupidly worn skinny jeans (the sort of skinny jeans you have to yank by the belt loops while jumping up and down to get in to), and found myself in a precarious situation in the tiny toilet holding an extremely wriggly baby with my jeans stuck around my knees. Moments before I was about to admit defeat and open the door to plead for someone to hold my baby while I restored dignity, I managed to wedge Tilly between my chest and the toilet wall and force my jeans up through sheer willpower. Rookie Mum Wardrobe Mistake.

I chalked the mission up as a success, and enjoyed four gorgeous days with my friend and our cheerful babies.

The trip home, though. OHMYGOD, the trip home. Having farewelled my friend and her baby with cries of “let’s do this again all the time!” I went to board our flight, which I’d chosen as it coincided with Tilly’s bedtime. “Excellent”, I thought, “She’ll have a bottle, fall asleep in my arms, I’ll watch a movie, and we’ll be home!” Which may have been the case, if the flight hadn’t been delayed. Sure, the baby in her PJs crawling madly around the departure lounge while laughing hysterically looked cute to most people, but fellow parents and I exchanged Meaningful Glances. No good ever comes of an over-tired baby, even a happy one, and we all knew it.

No good did come of that over-tired Tilly. She kicked, flailed, shouted, cried, clawed at my skin and flung herself backwards for the entire flight. The flailing and shouting didn’t even stop during two nappy-changes in the tiny toilets. Nothing placated my usually-jolly baby. Not bottles nor toys nor books nor singing nor jiggling nor cuddling. There was a brief reprieve where she was distracted by the zipper on the clothing of a passing passenger, but that zipper happened to be the fly on his trousers, so that distraction was hastily cut short.

After a while, I stopped making apologetic faces at my fellow passengers and just avoided all eye contact. To prevent myself from going completely insane whilst holding my wailing infant, I played a daring game of “would you rather” with myself, and decided I would gladly swap places with the man who kept racing down the aisle while urgently stating: “excuse me! I really need to get to the toilet!” I WANTED to be that man. I also decided I’d rather go through childbirth again than spend another moment on that plane (although, to be fair, Tilly was born by c-section and it was an absolute breeze, so generally speaking I’d rather give birth again than clean the oven).

At one stage, a very nice crew member recognised the dead look in my eyes and hand-fed me four Lindor chocolate balls in quick succession so I’d have something to keep me going (eating a meal and filling out the arrival cards were tasks I hadn’t attempted). I really loved that lady.

Eventually we landed. Glances received ranged from utter sympathy through to tight-lipped hatred. Except for the man two seats over from me, who woke up, removed his headphones, smiled and said, “she’s a good little traveller, isn’t she?”