A few friends are pregnant with their first babies at the moment, which has propelled me into a surge of nostalgia – combing through our newborn photos, and getting teary about little socks that I can’t face giving away. My pregnant friends agree that yes, tiny clothes are gorgeous and perusing Moses baskets online is a worthy cause for reaching their data cap, but they all look at me like I’m drunk at 10am when I say, “and isn’t being pregnant just so wonderful?”

Flicking through my pregnancy diary, there are tales of sore hips, exhaustion, uncomfortable nights, and all-day sickness, but I think Mother Nature suppresses those recollections so that the human race continues. Or perhaps the sleep deprivation after Tilly (my youngest) altered my brain function. Either way, the upsides of having a massive front side are dominating my memories.

I loved maternity clothes, that wonderful comfortable world of elasticised waist bands and stretchy tops. Seriously, jeans that appear normal, but with little elastic inserts where no one can see? Genius! A couple of friends had babies just before I did and were keen to offload their maternity stuff, so I suddenly had a wardrobe full of extraordinarily comfortable clothes, for FREE. Gone are the sailor dresses and overalls that our mothers wore – preggy gear has taken some serious steps forward in fashion.

Pro tip: hang on to at least one maternity bra. They’re invaluable for stuffing with socks and wearing to costume parties. My husband wore mine just last week when we both had to dress up as Uma Thurman for a quiz night.

Now I realise this one is contentious, because not everyone enjoys the way they morph whilst growing another human, but I thought it was incredible. After years of endometriosis and infertility I’d been feeling a bit let down by my body, but when I was pregnant I felt like it was finally doing something I wanted it to. And when I exceeded the weight gain recommended by the pregnancy books by roughly double (cough), the aforementioned stretchy clothes covered it all up.

Oh, and the boobs…undoubtedly the best bit. When I was six months pregnant, I thought, “Wow, I guess this is how my knockers are going to look from now on, and I’m not at all disappointed”. I realise now I was deluded, but the perky cleavage was fun while it lasted.

A man on a plane displayed his annoyance at having to get out of his seat after I pointed out that me climbing over him with my gigantic bump was a greater inconvenience to both of us than him standing in the aisle for a moment. He then hogged both armrests and rolled his eyes when I asked for the cassava crisps AND the cookie. So just for funsies I spent the flight sporadically wincing and checking the seat for dampness while shooting him worried looks. I’ve never seen anyone bolt so quickly from their seat upon landing.

When I was pregnant the first time, a curious little boy asked me what was under my shirt. I told him it was a baby, and he asked to hold it. I explained that he couldn’t because it was inside my tummy. He started to back away, looked at me with wide eyes, and whispered: “you mean…you mean you ATE that baby?” Having little experience with the fragile minds of preschoolers at that time, I let out a wicked laugh as he scurried back to his mother and carried on with my day. Now that I have two little girls who cover their eyes during the giant snowman scene in Frozen, I’d like to extend a formal apology to the parents of the little boy who probably still has nightmares about a baby-eating lady.

The list of food to avoid when pregnant is lengthy and disappointing. So the logic I employed was to go carte blanche on anything approved for consumption. Eating for two may be a myth, but woe betide anyone who challenges a pregnant woman at a buffet.

The fact I “showed” from eight weeks probably had more to do with the potato scones and lamingtons I inhaled than any actual baby growth. One afternoon I consumed an entire family-sized bag of jellybeans, which I felt justified in doing, as I was, myself, family sized. Then I freaked out about gestational diabetes and was consumed by guilt for days (now there’s a non-fun bit of pregnancy I do remember – the worrying that you’re doing everything wrong bit).

Pregnancy is a roller coaster for some, and a walk in the park for others. Then all of a sudden you find yourself moments from holding your baby in your arms and wondering how you’re going to cope with a newborn. But as I remember, all newborns do is sleep, right? 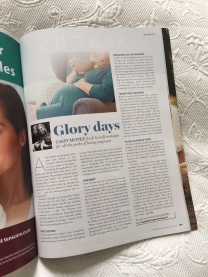 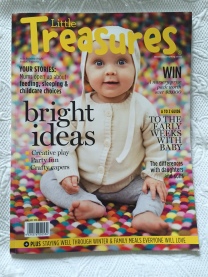