Recently I had the sheer pleasure of taking lone flight to see my best friend. It was too early in the morning to summon the drinks trolley, but the in-flight entertainment app seductively touted season one of ‘Big Little Lies’, which I’d been meaning to see for ages, so I was as happy as a temporarily childfree woman on a trans-Tasman flight at 6.30am could possibly be. Alas, the entertainment app gave the middle finger to all passengers by refusing to work. The technology fail turned out to be a blessing in disguise because I had an uncracked copy of Dawn O’Porter’s ‘The Cows’ stashed in my bag (there were no blessings, disguised or otherwise for all the parents on the flight who had to find other forms of entertainment for the next four hours), and five pages in I was wishing the plane could just fly until it ran out of fuel so I could read the whole thing.

I won’t give too much away, because since reading ‘The Cows’ I’ve looked at a few online reviews, and holy shit, some of them are like that dick person on Facebook who announces someone else’s pregnancy before they’ve even told their own family, or all those people who tweeted “Dumbledore dies!” There are surprises in the book that are much more confronting and alarming when you don’t know they’re coming (you know, surprising surprises).

Kristen Wiig is quoted on the front cover (the cover art is striking, btw) as saying, ‘Funny and excruciating. You’ll think about it for weeks!’ And she’s right. Dawn O’Porter injects a special take on the themes of social media’s impact on our lives, online trolling, the cross over between public and private, families, friendships, the right to owning your own choices, how society views female sexuality, and how things are just better when we try to understand other women instead of judging them. As I’ve said before, women who take a dig at other women from behind a fake feminist shield really gets my knickers bunched up, so there was a lot in ‘The Cows’ for me to love.

The driving force behind the plot is that women don’t need to fit a stereotype, “cows don’t need to follow the herd”. The story centres on Tara, Cam, and Stella who don’t know each other but become linked as the plot unfolds. Tara is a documentary maker and single mum navigating the world of misogynistic workspaces and judgemental school mums, Cam is a successful blogger who publically lives her private life online to promote positive body image and show how not conforming to the ‘normal’ goals of marriage and kids is really awesome thankyouverymuch, and Stella who is PA to a photographer while dealing with grief and having to make choices about her health.

Dawn O’Porter takes care to make each of the women perfectly imperfect. Cam is intelligent and sexy, but has gangly limbs, man-hands, and a few social phobias to keep her from being too 10/10. Tara is professionally shit-hot and fiercely smart, but also sounds like a bit of a scruff, and goes about smelling of cheese after The Terrible Thing happens. Stella is the darkest of the characters, intriguing, unsettling, and probably the one I’m least inclined to go out for a drink with or ask to cat sit for me.

A few reviewers have commented that the male characters in the story are one-dimensional. I can’t say that’s something that stuck out for me, and um, *uses gentle voice*, the story isn’t about men. It’s about women and the way they view themselves and other women. The male characters might seem a bit secondary, because they are secondary in this case. I don’t know Dawn O’Porter personally (although I feel like I do, now that I’ve relentlessly stalked her via Instagram, Facebook and Twitter), but I get the feeling she’s the kind of person who rolls her eyes so hard it hurts enough to pop two paracetamols when she reads that sort of criticism.

The value society places on women as breeders is a theme that really sang out. My own path to motherhood wasn’t completely straight forward, and I adore my kids (mostly), but I feel very stabby when women patronisingly tell women who’ve chosen not to have children that they don’t know what they’re missing out on, their life isn’t complete, they’ll change their mind one day blah blah. Cam receives emails throughout the story from Samantha, the representative of her main advertiser, who says things like “we were thinking maybe it is time to recruit some guest writers for the site? We would like to suggest a mummy blogger, to set a balance between your childlessness and normal women?” Samantha is pretty much every sanctimonious “know better, do better!” mother in an online parenting thread. Fuck OFF, Samantha.

Further to my mention of online stalking Dawn O’Porter (can I just call her Dawn now? I feel like I could, now that I’ve seen a picture of her kissing her cat who looks exactly like my cat), I’ve got a not-insignificant crush, and a deeper understanding of her connection to each of the characters. Dawn has made a whole host of documentaries (Tara), has dealt with significant loss (Stella), and is a successful columnist/blogger (Cam). She has amazing hair (no connection to the characters is immediately apparent), and does good things for charities.

Upsettingly, she’s married to Chris O’Dowd and they’re about to have their second baby. I say “upsettingly” because he’s been second equal on the list of men I’d like to be my next husband ever since I saw him in ‘Bridesmaids’. In case you were wondering, first is David Walliams, and second equal with Chris is Manu the French chef from My Kitchen Rules Australia (hey, we love who we love, and I seem to love men who’ll either make me laugh or feed me). But if I can’t have him, I’m happy that Dawn does.* 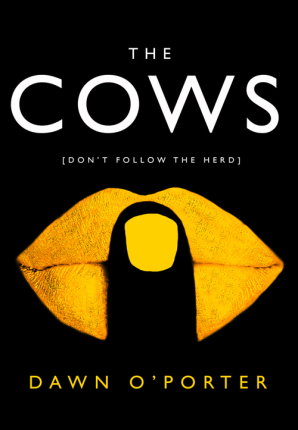 ‘The Cows’ is printed by HarperCollins.

*I should note here that I really, really love my actual first husband.