I heard the phrase “you check your dignity in at the door during childbirth” bandied about a few times when I was pregnant. Sure, I’d seen the antenatal class photos and thought I knew what was up (and down, and sideways, and is-that-even-part-of-a-human-body?!), but after four endometriosis operations, a myriad of tests and a round of IVF, I already felt like my dignity was that unclaimed suitcase you see going around the luggage carousel at the airport.

Pregnancy introduces new levels of embarrassment to women the world over. Maybe you opened a car door and threw up in the gutter of a busy street while in the throes of morning sickness. Perhaps you kicked your shoes off under the desk at work then found yourself unable to cram them back on your swollen tootsies when it came time to attend a meeting. It’s not unusual to burst into noisy sobs during TV ads. Inappropriately timed and completely unexpected burps that rival those of a drunk first year university student, anyone? All will be excused, because you’re growing an actual human.

I thought the child-birthing bit surely couldn’t be TOO undignified after the ‘struggling to get knocked up’ and ‘actually being pregnant’ stages. Then I found myself nude from the waist down, shrieking “I don’t really want to do this anymore!” as a team of strangers suspended me from my ankles in an attempt to get a misbehaving spinal block working. It would seem there were new undignified depths to which I could sink.

Many women prior to delivery have concerns about being embarrassed in the birthing suite. Start typing “during childbirth” or “during labour” into Google, and “do you poop” comes up as a suggestion straightaway, giving a hefty indication as to what weighs on the minds of the heavily pregnant. Nudity, yelling and loss of control sound like the perfect recipe for a hospital walk of shame – but we can all rest easy in the knowledge that doctors and midwives have seen it all, and even if you show them something new they’ll never admit it. Anything that happens during the delivery process is absolutely excused, because you just brought an actual human into the world.

Cradling my own newborn after apologising for throwing up all over the hospital bed (thank you, morphine reaction), I thought, “never mind, we’ll be home soon, and dignity will be restored”. Wrong again.

“Get it together, lady”

Suddenly, you’re thrust back into life where you’re expected to function as a regular woman again, but with the hindrance of a tiny person hardwired to bring shame upon their mother as they grow.

Many a sleep-deprived breastfeeding mother has hit the supermarket with their shirt undone, answered the door to an unsuspecting courier with their shirt AND feeding bra undone (just me?), or had the sinking realisation that they’ve ventured somewhere public in a grey top…without breast pads. A fast let-down can give boobs a mind of their own, as was discovered by a friend of mine while sitting next to a (handsome, childless) stranger on a plane: her baby pulled away while feeding and my friend showered her travel neighbour liberally with breast milk. It made for an awkward flight.

Babies explode from both ends with little or no warning; quite often in public or in a car seat on the day you’ve forgotten a change of clothes and spare nappy. Telltale stains on hand-me-down leggings offer some comfort that pootastrophes are quite common, and something of a rite of passage. My first daughter (Amy) had reflux, so we quickly became accustomed to our floor looking as if flock of seagulls had been nesting on it, and our washing machine had a workout from all the changes of clothes. I should have known better, but I put Amy in a front pack facing outwards for a stroll around the shops one day, and could only watch in horror as she upchucked all over a shop counter and fetching display of reusable bags.

Then one day your little monkey starts talking, and Humiliation By Child really steps it up a notch. Months of patiently coaxing language out of your cherub will be blind-sided by the one time you get cut off in traffic and say something you shouldn’t have, which they then repeat to everyone from the checkout lady to your mother-in-law. I guess some words are just easier for kids to remember than others.

Amy has come out with some clangers in public that have left me with a gaping mouth. For example: after watching me run around tidying up one morning while muttering “I’m SUCH a hoarder” to myself, she bounded into a community music group and announced “Mummy’s cleaning up ‘cos she’s a whore!” I was seven months pregnant at the time. It was not a good look. My friend of squirting-breast milk-over-a-stranger-on-a-plane fame was horrified when her daughter solemnly reported to her daycare teachers: “the police comed to take me away” when they’d simply passed through a routine registration check on the way to daycare that morning.

Many parents have been left red-faced during the “bums are funny” and “every person is different” phases, when no fart noise nor body passes without comment. Sometimes I’ve wondered if I could get away with pretending the child who’d just shouted, “look at that very short and very fat man! Isn’t he so short and fat?” wasn’t mine, but then another friend’s three-year-old screamed “you’re not my real mother!” during a security check at LA airport and so I decided it was best to just apologise to offended strangers instead.

On a recent long car trip, we dropped in to see my husband’s cousin and family. A lovely time was had by all, until poor little Tilly suddenly opened her mouth and threw up her lunch (and everything she’d eaten dating back to when she started solids, by the look of it) all over herself, the kitchen table, and me. Moments later, I was standing on a front lawn in the town of Cambridge in my knickers next to my nude toddler, being hosed down by my cousin-in-law. Before children I would have been utterly mortified at a) being covered in someone else’s vomit and b) the knickers/garden hose situation, and my burning shame would have put me off ever returning to New Zealand’s mighty Waikato region. On this occasion I laughed it off, gratefully accepted the towel offered for the inevitably chucky car trip, and we made plans to catch up on our way back through.

If anyone else made me want to disappear through the floor with embarrassment like my children do, I’d be after a heart-felt apology and possibly a bottle of wine by way of making amends. But the indignities that have come about through infertility, pregnancy, child birth, and raising my girls while they stumble through developing social awareness are all completely worth it. Not only do I get to watch and marvel as two little people grow, but these “experiences” keep me firmly grounded… and give me great ammunition for their 21st speeches. 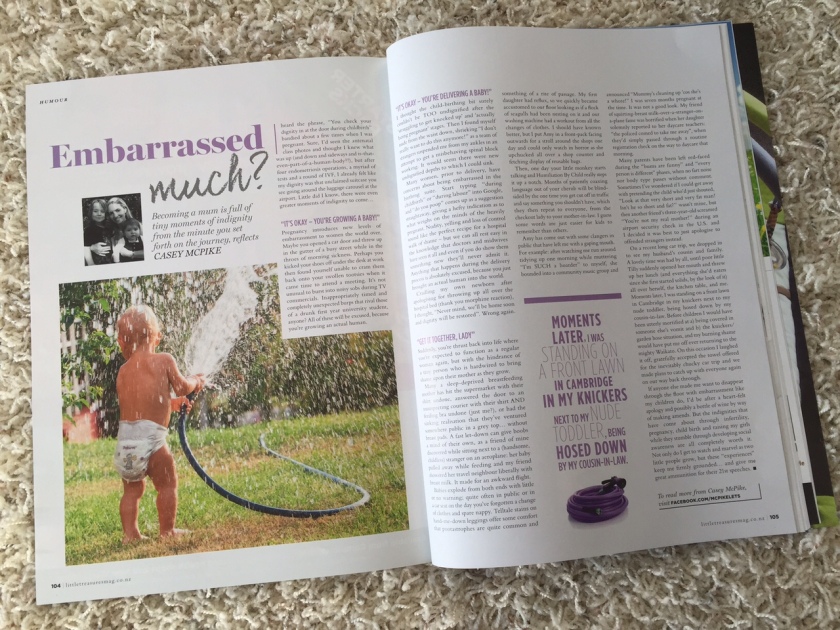 (Published in the April/May 2016 edition of Little Treasures Magazine)