At the risk of coming across as a bit neurotic and high maintenance, I think having babies has made me a bit neurotic and high maintenance. Previously mundane or everyday situations have taken on a whole new meaning now that there are two tiny humans in our life. The little things have become big things, and motherhood can feel a bit like one of those reality TV shows where people have to make it through obstacle courses covered in soap while big padded gloves throw unexpected blows. Except there’s no cash prize, and instead of an exciting purpose-built course, the obstacles are things like long queues at the supermarket. For example:

Holiday traffic with the husband before kids: “Oh rats, traffic is at a standstill. Never mind, let’s listen to some music, have a chat, and share the chocolate bar that’s in my small and tidy handbag”.

After kids: “Noooo! I’m down to the last three crackers for the bored toddler, and then there’s nothing but a half-empty packet of crystallized raisins somewhere in the depths of my enormous bag. If the car stops moving the baby will wake up and want to be fed, so we’ll have to pull over and get even further back in the traffic, which means we’ll be late home and late to bed, then the kids will inexplicably wake up two hours early tomorrow, so while I find the Wiggles play list and break the crackers up into tiny pieces to make them last longer PLEASE JIGGLE THE GODDAM CAR TO KEEP THE BABY ASLEEP”.

Choosing a restaurant before kids: “That one looks nice, let’s see if they’ve got a table at 7pm – we can wait at the bar and enjoy a drink if there’s a wait”.

After kids: “Do they have highchairs? Do they have a kids’ menu so that we can pay slightly less for food that they probably still won’t eat anyway? Is it noisy enough to drown out the sounds of potential meltdowns, but not so noisy that it causes a meltdown? No no, we can’t go to that one – last time we went there the toddler stuck a decorative berry up her nose and I had to block one of her nostrils while shouting ‘blow! Blow as hard as you can!’ until the snot-covered berry shot out onto the table. Ok that place looks good, and they open at 5, so if we order the second we sit down it should be fine. Or we could just stay home”.

Daylight Saving before kids: “Yay! Long evenings! Leisurely walks after work because the sun is still high in the sky! Awww, Daylight Saving is finishing now? Oh well, those first few days will feel like we’re getting a sleep-in”.

After kids: “I’ll order some blackout blinds as soon as I’ve finished explaining why it is actually bedtime even though we applied another layer of sunscreen just a couple of hours ago. Daylight Saving is finishing now? Ah, so this is the bit where the kids don’t cotton on to 5 A.M. being the new 6 A.M. or is it the other way around? Either way, it’s too early, please go back to sleep and let me revel in the pseudo sleep-in”.

Procrastinating work before kids: “Wow, I’ve left it a bit late to get this done. I can finish it this evening, though”.

After kids: “This is a bit close to the wire, but if I start the second the baby falls asleep I can get it done by midnight. Wait… is that? Yep, that’s definitely an ‘I’ve got an ear infection and we’re going to going to spend the next four hours at A&E’ cry”.

Hearing neighbours dragging the wheelie bin down the driveway at 11pm before kids: “Must be bin night. Is ours even full? It can probably wait another week”.

After kids: “What kind of monsters bang and scrape their bin right under the kids’ window? Why didn’t they take theirs out when they saw me at the curb forcing the lid down on our overflowing bin well before 7 P.M? Ooo, but now their bin is out and it’s dark, do you think we could sneak in a few nappies that I couldn’t cram into ours?”

I’m sure my thought patterns will return to normal at some point, maybe when the girls are teenagers. There’ll be a whole new set of obstacles then, but perhaps we’ll be able to discuss them at a restaurant late one summery evening after being stuck in holiday traffic.

I originally wrote this piece for the NZ Winter 2017 edition of Little Treasures Magazine. 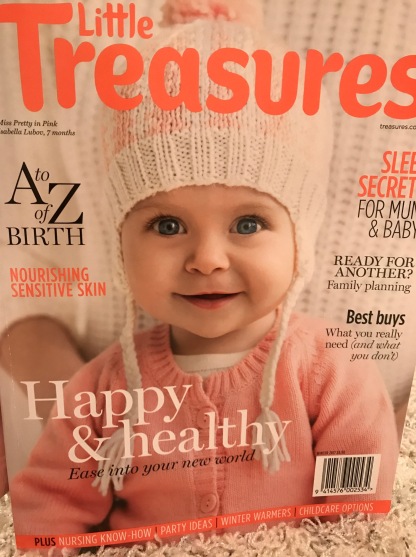