Loved talking ‘Bad Parenting’ with Hayley and Jack on Breakfast. You can see the interview by clicking right here

And this is the post that sparked the conversation:

Confessions from the ‘bad parent’ corner…

It’s not raining so technically we could all be outside having adventures, but instead this morning my kids have watched way too much Netflix. They’re not even watching something educational that I can then trill “ok children, let’s all make our own volcano from baking soda and food colouring now like they did on that highly stimulating science show you just watched!” and feel all pious about it… they’re watching one of those series about animated moody teenagers in lots of makeup bitching at each other.

But this morning the allure of a Sunday cup of tea in bed in bed was just too strong. I was thinking about a busy week ahead, had some stuff to sort out in my head, and I knew that if I tried to think about that while up with the kids I would have been distracted and gumpy and even more of a ‘bad parent’ than I was hiding in my bed with a cup of tea while they watched mind-rotting tv.

Sometimes, you need to be a ‘bad parent’ so you can be a ‘good parent’. This afternoon I’ll try harder – we’ll go to a park (unless it’s raining this afternoon, and it’s Auckland so it probably will be), or bake something, or play a game. We probably won’t make a volcano from baking soda and red food colouring because trying to stay laid back and all “hey it’s a family house stuff is bound to get stained!” while doing things with my kids that involve red food colouring turns me into a very ‘bad parent’. (“Mummy, why is there a vein throbbing in your forehead?” “No reason Tilly, but PUT THE LID BACK ON THAT BOTTLE! GIVE IT TO ME I’LL DO IT!” etc).

There’s so much pressure to be parenting at 100% all the time, and the internet (and real life) is rife with people ready to tear you down or smugly present their own ‘good parent’ alternative for any sub-optimal parenting choices. Those people are amazing, and I enjoy filing their insta grid pics and Pinterest boards in the “for when I want to nail life and parenting” folder of my brain. It’s lovely that you made an organic quinoa, spatchcock and kale 4-hour casserole from your own garden after an afternoon of finger painting and recorder practice. My children will tonight be dining on tinned spaghetti on toast, but I’m going to arrange strips of cheese on top and call it a monkey cage and they will say “Mum that’s so clever!” and eat it without a single complaint, so suck it, Pinterest. Also, if anyone ever buys my kids a recorder they will be struck from our lives.

Going out on a limb here, but honesty in ‘bad parenting’ is good for the soul. There’s no relief like talking to another mum who confesses she nearly lost her voice trying to out-shout her tantrumming four year old (even though the internet says you should calmly repeat “I can see you’re feeling frustrated”) after you’ve had a shit of a time yourself to make you feel normal. Or going somewhere with other parents and hearing them say “actually, should we just order chips for the kids because it’s the only thing mine will realistically eat and I don’t feel like dropping $20 on a small plate of something they’ll cry over?” You’re all safe in the knowledge that you’ll give your respective kids broccoli and carrots tomorrow (maybe).

Being a ‘bad parent’ is part of being a ‘good parent’. We need to give ourselves permission to tap out, to recharge, to admit that sometimes “close enough is good enough”. Our kids know we love them, so taking time to prioritise our own happiness (or our need to hide to in the pantry inhaling chocolate while shouting “no you can’t have a treat! Eat a banana if you’re hungry!”) is what ultimately makes us ‘good parents’.

What ‘bad parenting’ do you do that ulimately makes you a better parent? 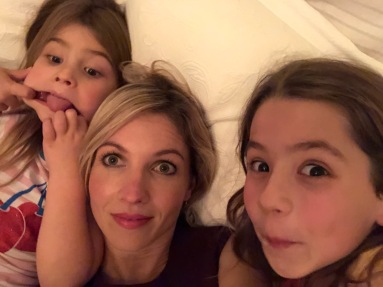 The six year old got this bottle of perfume for Christmas and is well on her way to using it up. Can confirm her room, carpet, toys and the rest of our house have all been liberally drenched in the scent of SJP. There is no oxygen in our house. Only fragrance. Send oxygen masks or a convincing “less is more” perfume application instructional video. . . #perfume #sixyearold #motherhood #sarahjessicaparker #kids
My dress shrunk in the wash and the five year old turned my failure into her success by turning the dress backwards and making it work for her. She whispered to her dad, “keep making mistakes with the dryer, Dad, it works out really well for me”. . . #daughter #kids #parenting #dress #laundrydisaster #mother #mum #mom
It was a fun start for sisters this morning. . . #siblings #sisters #familylife #mornings
Dawn O’Porter obsession officially kicking off again now that ‘So Lucky’ has arrived! I loved ‘The Cows’ so much I couldn’t shut up about it and bought it many times over as a go-to birthday present for awesome ladies. Thanks for writing awesome stuff, @hotpatooties also your hair is fringe GOALS. #bookstagram #books #dawnoporter @harpercollinsnz #bookclub #gifted (but I would have bought it anyway)
So you can get the song stuck in your head right from the crack of dawn. What kind of monster... . . #babyshark #parenting #kids #no #cereal #alltheno
When you really don’t want your little sister in the photo JUST ONE TIME